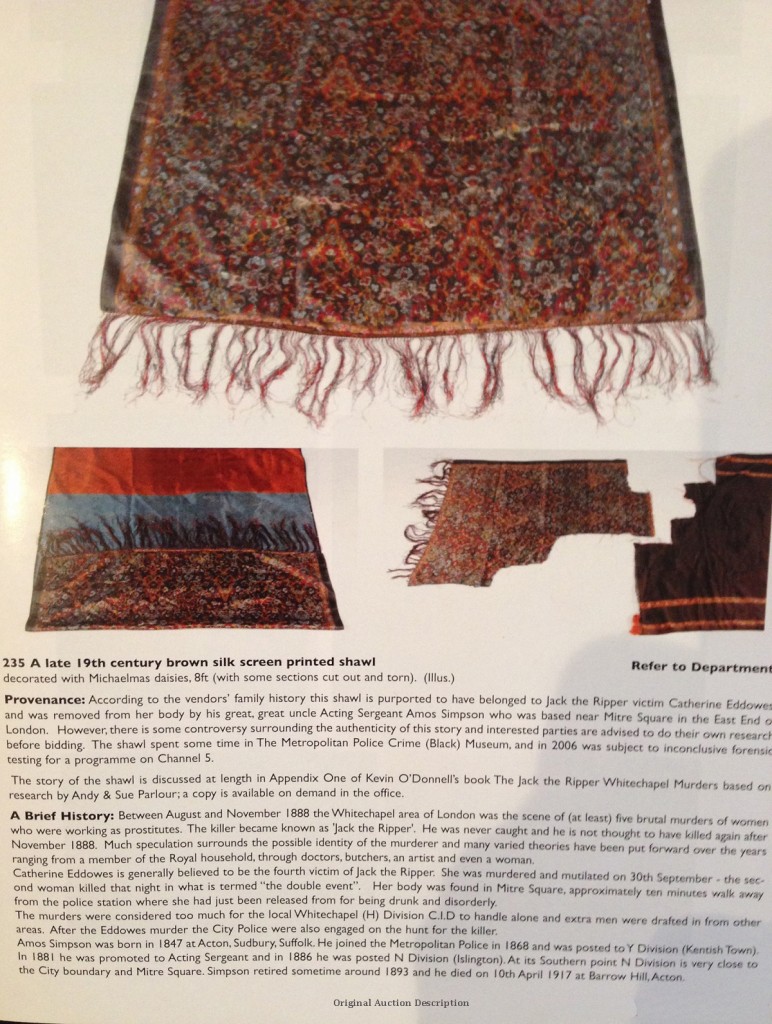 The Shawl measures 24 inches by 71 inches.

In 2007, businessman Russell Edwards bought a Victorian shawl at an auction.

The shawl was large – over 7 feet long, made of silk, obviously very old, and damaged, with pieces missing. The shawl had been taken by a policeman from the murder scene of Jack the Ripper’s fourth victim, Catherine Eddowes, on 30 September 1888. Since then, aside from a few years in Scotland Yard’s Black Museum, it had been safely stored away by the direct descendants of that policeman.

In his book, Naming Jack the Ripper, to be published on Tuesday 9 September, Russell Edwards details the years of dedicated historical and scientific research that have gone into proving without doubt that Aaron Kosminski was Jack the Ripper.

His exhaustive historical research coupled with cutting-edge DNA testing undertaken by leading forensic geneticist, Dr Jari Louhelainen of Liverpool John Moores University, have linked the shawl with the descendants of Kosminski and his victim. Crucially, DNA taken from blood and semen stains on the shawl matched the descendants of both Catherine Eddowes and her killer.

The key that began to unlock the mystery was the shawl’s distinctive pattern – Michaelmas daisies. Russell Edwards remembered that police and newspaper reports at the time of Catherine Eddowes’s murder had referenced an item of clothing with a similar pattern. It was that shawl that was up for sale at a Suffolk auction house in 2007.

The shawl’s owner told Russell that a London policeman, Acting Sergeant Amos Simpson who was on duty the night of Eddowes’s death, asked if he could have it for his dressmaker wife. Understandably, Simpson’s wife reacted in horror at the thought of using a bloodstained shawl. It was stowed safely away, never washed, and passed down from generation to generation.

This family history could never be definitive proof of a link to Catherine Eddowes, despite a letter confirming its provenance. Only scientific analysis of the stains on the shawl could prove without doubt its presence at the murder.

As Russell Edwards continued his research into the story of Jack the Ripper, Dr Jari Louhelainen, Senior Lecturer in Molecular Biology, began his painstaking examination of the shawl.

Primary analysis by Dr Louhelainen showed the dark stains on the shawl were not just blood but were ‘consistent with arterial blood spatter caused by slashing’. A large dark stain could, he suggested, also be evidence of split body parts (some of Catherine Eddowes’s organs, including her left kidney, were removed during her brutal murder). White stains fluoresced under UV light suggesting the presence of seminal fluid.

So began the three year scientific analysis of the shawl and the search for the descendants of Catherine Eddowes and the man who Russell Edwards – and many others, including the police officers who originally investigated the case and Scotland Yard – suspected was Jack the Ripper. In the end, it was DNA coding that confirmed the authenticity of the shawl and the identity of the killer.

At the same time, findings by molecular chemist, Dr Fyaz Ismail, who tested the blue dye on the shawl using nuclear magnetic resonance, suggested that the shawl was Russian and predates the murders. This backed up Russell Edwards’s theory that the shawl, which was of particularly fine quality, belonged to Kosminski and not to Eddowes, who was unlikely to have owned such a costly item. The region of Poland where Kosminski lived was under Russian control and would have traded with its neighbour.

The third part of the jigsaw focussed on samples of the seminal fluid from the shawl. Dr David Miller, Reader in Molecular Andrology at the University of Leeds managed to find the cells from which the DNA was isolated. All that remained was for Russell Edwards to find a descendant of Kosminski through the female line.

The woman Russell traced, with the help of genealogists, offered samples of her DNA to make the crucial comparison. Seven years after Russell Edwards had bought the shawl, they finally had a match: Dr Jari Louhelainen matched DNA from the semen stains on the shawl to the descendant of Aaron Kosminski.

The circle is now complete. One of the greatest unsolved crime mysteries of all time has been solved through cutting edge science, historical research and a great deal of determination and good fortune. Aaron Kosminski – Jack the Ripper – has been placed, once and for all, at the scene of Catherine Eddowes’s horrific murder.

Provenance of the shawl

The shawl bought by Russell Edwards in 2007 was put up for auction by the family of David Melville-Hayes, descendants of Acting Sergeant Amos Smith who was at the murder scene. It had been kept in a box by the family and was lent to the Black Museum at Scotland Yard before being returned to them in 1997. Until the work led by Dr Jari Louhelainen from 2011, the shawl had never been examined for DNA or subjected to chemical testing for proof of age and geographical provenance.

Using a nuclear magnetic resonance instrument, Dr Fyaz Ismail, Senior Lecturer in Medicinal Chemistry at Liverpool John Moores University, confirmed that the shawl’s natural dye shares characteristics similar to those he had seen before from the area around St Petersburg.

Catherine Eddowes was the Ripper’s fourth victim; she died on the night of 30 September 1888, the same night as his third victim, Elizabeth Stride. Catherine was born in Wolverhampton in 1842. The family moved to Bermondsey when she was about two. Orphaned in her teens, she moved back to the Midlands and then to Norfolk before returning to London; she had a daughter and two sons by Thomas Conway from whom she separated in 1881.

On the night of 29 September, Catherine was arrested for drunkenness and taken to Bishopsgate Police Station at around 8.30pm. She was released at 1.00am once she had sobered up and headed off towards Houndsditch in London’s East End. Forty five minutes later she was found brutally murdered in Mitre Square. She was 46 years old.

Aaron Mordke Kosminski was born in Klodawa in central Poland on 11 September 1865, the youngest of seven children – four girls and three boys – of tailor Abram Josef Kozminski and his wife, Golda Lubnowski. Following the death of Abram, the family emigrated to the East End and it is certain that by the time of the murders, Aaron Kosminski was living very close to the murder scenes.

The records for Aaron Kosminski are scanty. There is a tantalizing glimpse of him in December 1889 when he appeared in court after being arrested for walking an unmuzzled dog in Cheapside. Kosminksi was fined.

He reappears in 1890 living in the Mile End Workhouse where he was described as ‘destitute’ on admission. Although discharged later that year, he was readmitted in February 1891 suffering from ‘mania’ having attacked his sister with a knife. The decision to commit him was ‘unchallenged’ by his family.

Aaron Kosminski was on the list of credible suspects at the time of the Ripper murders. In the mid 1890s, Kosminski was taken in by the police to be identified by a witness who had seen him with one of the victims on the night of one of the murders. A positive identification was made but the witness refused to give incriminating evidence. The police had little option but to release Kosminski into the care of his family.

On 4 February 1891, by now exhibiting serious mental problems, Kosminski was taken back to the workhouse, deemed insane and was committed to Colney Hatch Asylum in north London. There the admission register describes Kosminski as twenty-six years of age, Hebrew, single and whose occupation was a hairdresser. He was transferred to Leavesden Asylum near Watford in Hertfordshire in 1894.

Kosminksi died at Leavesden on 24 March 1919, the cause of death, gangrene. He was buried by the Burial Society of the United Synagogue on 27 March 1919 at East Ham Cemetery

Russell Edwards, who is married with two children, is a 48 year old businessman. Originally from Birkenhead, he now lives in Hertfordshire. He first got to know the Whitechapel area in London’s East End as a student and about the Ripper story in the early 1990s. Ten years later, Russell started to read more and more about the case and revisited the area where the murders had happened. What started as an interest became, by 2007, a mission to prove the identity of the world’s most famous murderer. Naming Jack the Ripper is his first book.

Dr Jari Louhelainen is Senior Lecturer in Molecular Biology at Liverpool John Moores University, as well as Associate Professor of Biochemistry at University of Helsinki. He has two major lines of research – mammalian/medical genetics and forensics.

Dr Louhelainen has a PhD in Molecular Epidemiology from the Karolinska Institute in Sweden and and MSc in Biochemistry from the University of Helsinki.

He read Chemistry and Biochemistry at the University of Salford where he subsequently worked as a Research Fellow; his research with Dr Neal Stuart Isaacs at The High Pressure Unity on the ‘greening’ of the previously highly polluting Mercaptobenzthiazole process (MBT) received the Presidential Award from Bill Clinton for Greening the Environment. University of Hertfordshire: Senior Lecturer in Medicinal Chemistry and Spectroscopy.

Dr Ismail was appointed at Liverpool John Moores University School of Pharmacy &Chemistry in 2001. He currently leads the Medicinal Chemistry Research Group, an international team of scientists that are committed to designing, constructing, testing developing new antimalarial compounds for global dissemination for the control and prevention of malaria.

Dr David Miller is Reader in Molecular Andrology at the Leeds Institute of Cardiovascular and Metabolic Medicine.

His specific area of research is focussed on molecular and genetic aspects of male infertility and reproductive function.