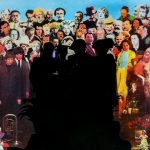 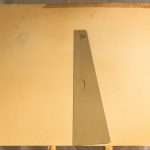 This Sgt. Pepper display is the ONLY one on Earth (circa very late Spring 1967) Just one was made. Due to insecurity that the Beatles work may be selling on the Beatle brand name only Paul McCartney wanted to hide the fact the new LP ‘” Sgt. Pepper’s Lonely Hearts Club Band’’ was the Beatles – so for a few brief days it was in the window at the HMV Record Store, London with the Beatles shaded in black to HIDE who the band actually were – this prior to the release of the iconic album. Later, they would release it with the band obviously having a profound change of heart inspired mainly by Capitol Records executives in the USA and even George Harrison who reportedly declared the concept, “daft”.

After some in house discussion Apple employee Alistair Taylor asked a young, unpaid, occasional office boy “get that fuckin’ thing out of the window before Paul puts us out of business for good.” It was delivered to the Apple offices that very afternoon by this young man who performed odd jobs as a fan who simply hung around the offices in hopes of meeting his hero’s.  Much later, in the Savile Row Apple offices the poster was, for a time, in John Lennon’s office against a wall. After arriving from California and a stint working for the Byrds, PR man Derek Taylor took possession by default, of the by then long forgotten one of a kind graphic.

’Sgt. Pepper’ is Paul, after a trip to America,” related John Lennon in 1967. “The whole West Coast long-named group thing was coming in, when people were no longer ‘The Beatles’ or ‘The Crickets’ – they were suddenly ‘Fred And His Incredible Shrinking Grateful Airplanes.’ I think he got influenced by that. He was trying to put some distance between The Beatles and the public – and so there was this identity of Sgt. Pepper. Intellectually, that’s the same thing he did by writing ‘She Loves You’ instead of ‘I love you.’” “It was an idea I had, I think, when I was flying from L.A. to somewhere,” Paul remembered in 1984. “I thought it would be nice to lose our identities, to submerge ourselves in the persona of a fake group. We would make up all the culture around it and collect all our heroes in one place. So I thought, a typical stupid-sounding name for a Dr. Hook’s Medicine Show and Traveling Circus kind of thing would be ‘Sgt. Pepper’s Lonely Hearts Club Band.’ Just a word game, really.” The flight mentioned above appears to be a return trip, Paul with roadie Mal Evans, from Nairobi to London in November of 1966. It is reported that the name of the fictional band came from Mal innocently asking what the “S” and “P” stood for on the pots of their meal trays. When Paul identified them as ‘salt’ and ‘pepper,’ this eventually lead to “Sgt. Pepper” and the beginning of Paul’s brainstorm. “We were fed up with being Beatles,” explained Paul in 1994. “We really hated that f*cking four little mop-top boys approach. We were not boys, we were men. It was all gone, all that boy sh*t, all that screaming, we didn’t want anymore, plus, we’d now got turned on to pot and thought of ourselves as artists rather than just performers… then suddenly on the plane I got this idea. I thought, ‘Let’s not be ourselves. Let’s develop alter egos so we’re not having to project an image which we know. It would be much more free.'”