The Unconditional Surrender of the German Third Reich

The document reads (in full; handwritten portions indicated in bold):

Only this text in English is authoritative

On behalf of the German High Command.

IN THE PRESENCE OF

for the French Army:] F. Sevez

With the Third Reich facing eminent peril, on 30 April 1945, Adolf Hitler killed himself in the bunker of the Berlin Chancellery, having arranged for Admiral Karl Dönitz to succeed him as Head of State, with the title of Reich President. After the fall of Berlin two days later, surviving German forces were still present in isolated pockets and occupied territories. Dönitz’s representative, Admiral Friedeburg, informed him on 6 May that Supreme Allied Commander Dwight Eisenhower was now insisting on “immediate, simultaneous and unconditional surrender on all fronts.”  General Alfred Jodl was sent to Reims to attempt to persuade Eisenhower otherwise, but Eisenhower immediately quashed such efforts by announcing at 9:00 p.m. on 6 May that, in the absence of a complete capitulation, he would close American and British lines to surrendering German forces at midnight on 8 May and resume the bombing offensive against the remaining German-held positions.

The unconditional surrender of the German Third Reich was signed in the early morning hours of Monday, 7 May 1945. The time on the document is noted “0241” hours (2:41 a.m.)  The scene was the war room at Supreme Headquarters Allied Expeditionary Force (SHAEF), located in the Professional and Technical School at Reims, the historic city in northeastern France that had been nearly devastated by the Germans during the war. Across the conference table, representatives of the four Allied Powers – France, Great Britain, the Soviet Union, and the United States – faced the three German officers dispatched by Dönitz: Colonel General Alfred Jodl (who alone had been authorized to sign on behalf of the German High Command), Admiral Hans Georg von Friedeburg, and Major Wilhelm Oxenius (Jodl’s aide and translator for the delegation). Lieutenant General Walter Bedell Smith, SHAEF Chief of Staff, led the Allied delegation as the representative of General Eisenhower, who refused to meet with the Germans until the surrender had been accomplished. Other American officers present were Major General Harold R. Bull and General Carl Spaatz.  British observers present were Admiral Sir Harold Burrough, Lieutenant General Sir Fred Morgan (SHAEF Deputy Chief of Staff), and Air Marshal James M. Robb.   General Ivan Susloparov, Chief Soviet liaison with the French Government and the SHAEF, represented the Soviet High Command, and he was accompanied by Lt. Ivan Chermiaev and Senior Lt. Colonel Ivan Zenkovitch as interpreters. Representing the French Chief of Staff (General Alphonse Juin) was Major General François Sevez.

REIMS, France, May 7, 1945 (Delayed) (UP) – Representatives of four Allied powers and vanquished Germany scrawled their names on a sheet of foolscap in a map-lined 30-by-30 foot room at 2:41 a.m. European time today and ended World War II in Europe.

In a ceremony exactly 20 minutes long, Col. Gen. Gustav [sic] Jodl, chief of staff of Admiral Doenitz’s government and long-time close friend to Adolf Hitler, surrendered all German armed forces on land, sea and in the air. The surrender is effective one minute after midnight Wednesday, British double summer time.

A high officer said almost all firing had ceased on the remaining fronts… General Dwight D. Eisenhower, smiling, confident and restrained, sat with his deputy, Britain’s Air Chief Marshal Sir Arthur Tedder, beside him. Later in a three-minute statement for newsreels, Eisenhower hailed the German surrender as the conclusion of the plan reached by President Roosevelt and Prime Minister Winston Churchill at Casablanca in 1942 – unconditional surrender.

“We have defeated Germany on land, sea and in the air,” Eisenhower said. He added that the peace was fittingly signed in France, a country which suffered so much at the hands of Germany and whose liberation started on D-day, just 11 months ago yesterday (Sunday)…

After the signing of the Reims accord, Soviet Chief of Staff General Alexei Antonov expressed concern to SHAEF that the continued fighting in the east between Germany and the Soviet Union made the Reims surrender look like a separate peace. The Soviet command wanted the Act of Military Surrender, with certain additions and alterations, to be signed at Berlin. To the Soviets, the documents signed at Berlin on 8 May 1945 represented the official, legal surrender of Germany, although it had few significant changes from the document signed the day earlier at Reims. The Reims signing ceremony had been attended by considerable numbers of reporters, all of whom were bound by a 36-hour embargo against reporting the surrender. As it became clear that there would need to a second signing before the Act of Surrender could become operative, Eisenhower agreed that the news blackout should remain in force, so that all Allied powers could celebrate victory in Europe together on 9 May. However, a journalist with an Associated Press outlet in Paris broke the embargo on 7 May, leaking the German surrender headline in the western media on 8 May, making it impossible to maintain the original timetable. Consequently, it was agreed that the Western Allies would celebrate Victory in Europe Day on 8 May, but western leaders would not make formal proclamations of victory until that evening, when the Berlin signing was imminent. The Soviet government made no public acknowledgement of the Reims signing and celebrated Victory Day on 9 May 1945.

This document was acquired by Joseph A. Lamb, who served on the staff of Supreme Headquarters Allied Expeditionary Force (SHAEF) at Reims, France in 1945. Four documents were signed, and Eisenhower had gifted this backup copy to Lamb following the surrender.  This document is identical in text to the German Instrument of Surrender held at the National Archives in Washington, D.C., with the minute handwritten detail reflecting the cessation date for all active German military operations, stating “8 May” instead of “08 May” as written on the present document.  In addition, the National Archives surrender document has the following caption typed beneath the signature of French witness Major General François Sevez: “Major General, French Army (Witness)” which was typewritten after the signing – clearly shown by the lighter type from a different typewriter. It was related that the German delegation made it a signing condition that the French could not be present at the signing, and it was finally agreed that the French representative would be invited to countersign the document as a simple witness since the event was taking place on French soil. Sevez signed in the lower margin as a witness.

Without question, the single most significant document of the 20th century in private hands. Its importance on a global scale cannot be overstated. It is confounding when one compares the pre-sale estimate of this historic piece with the limited choice and quality of what can be acquired in the fine art field for the same price.

Provenance: Acquired from Rolland McNeely, who received the document as an inter vivos gift from Joseph A. Lamb, now deceased. McNeely was the residuary legatee under the will of Joseph A. Lamb, who served on the staff of the Supreme Headquarters Allied Expeditionary Force (SHAEF), at Reims, France in 1945. Eisenhower gifted this signed backup copy to Lamb following the surrender. The National Archives requested this information in the early 1980s from prominent Beverly Hills, California manuscript dealer Charles Sachs, who acted as agent for the seller, Rolland McNeely, and his attorney, and they noted the minor above-mentioned differences in the present document in comparison to the National Archives copy. 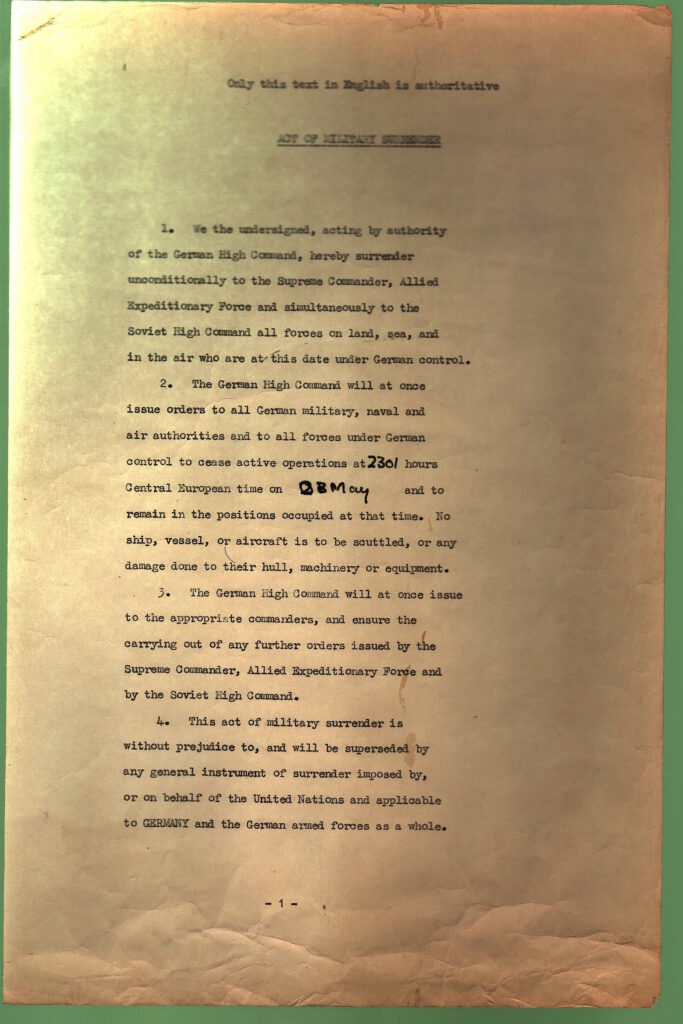 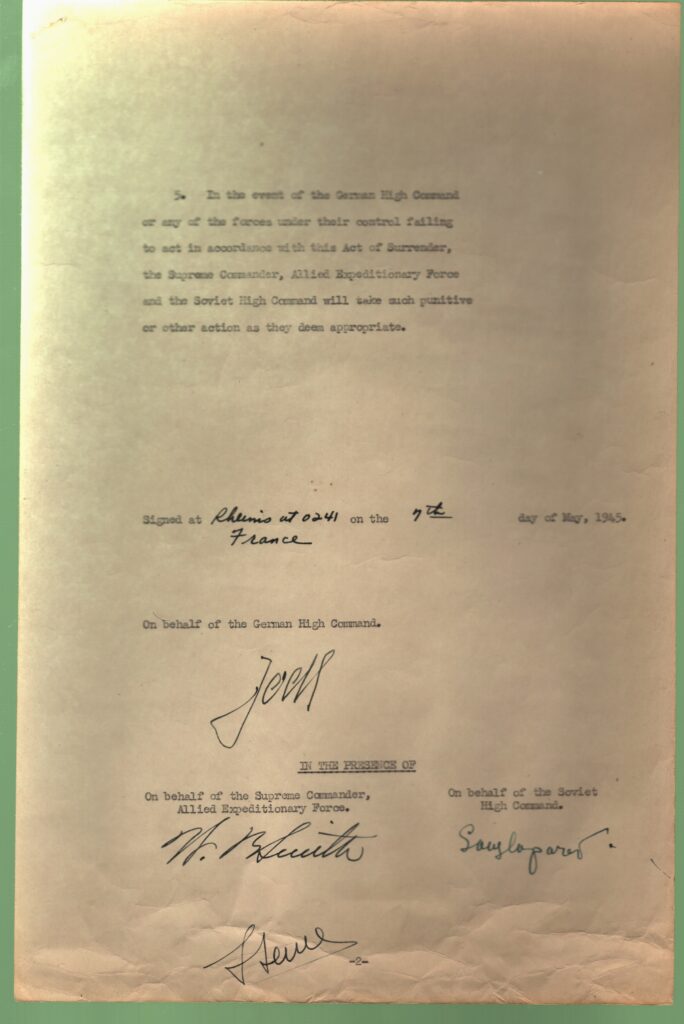