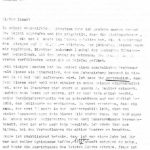 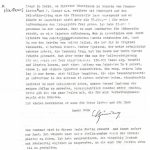 In my desperate situation, I called our friend Dr. Bejiski yesterday and told him that after the ” Stadtsparkasse” (Banking institution in Germany) played us for the last 2 months refused our application for 80,000 Deutsche Mark. In Jewish circles I was suggested to hand our application to “Direktor Faulstroh” (AmChu) from the German Effecten and Wechselbank. Dr. Besser already took initial phone calls.
Dr. Besser has an additional lawyer (named) Pineas as an associate, who will show up at your house in the next coming days from Johannesburg. I tell you confidentially that Mr. Pineas got involved in my business/case way more, even though his character reminds me of our A. Bankier. Since new brooms clean better, he is actually trying to support my settlement conference, and was also trying really hard to prevent the worst. You’ll understand that a man who has just been living in the Bundesrepublik for 3 months, doesn’t understand everything/can’t get a picture of the coherence. The efforts within the bounds of his possibilities might have produced fee estimates on his end, but I cant see a result yet. I now ask you/beg you to consider the necessary cushion during the negotiations.
If I think in retrospect, that a year ago I was with you and full of optimism towards the future, and now/today I have to carry the effects of the last year, I sometimes ask myself if it’s even worth living. I’m happy and full of hope that my patron/sponsor/benefator Buchmann can help you to get clarity about/in your situation, because a positive minded friend can create more in one conversation, than phone calls and letters always will. I ask you, my dearest star, write me as soon as you have any kind of result from Mr. Dr. Mahum Goldmann, because a “Din-Tojre” against your joint would make me ashamed. However, you were witness in Paris where Direktor Böcbelmann in presence of journalists and E Elsner, described amongst others with consideration/concern of the palestine war the financial situation would be tensed up and he couldn’t give out more than $35,000 at the moment for my expenditures during years of war. I took $15,000 in assumption that after fathering information it would be enough to start a life/existence in South America, which emerged in Argentina thoroughly help of the Joint – Honorpresol Murmis, which you can read in the letters of Walher? Pollan which I sent you the originals. Blank egoism/selfishness, which takes account of my 10 year long work, just brought fear to Mr. Murmis to this day, that neither defendant payed the brought in 150k Argentinian Pesos of the part auction for the joint New York, nor had the commission of the Joint New York to collect the safe mortgage. Especially for his son it was mostly important to get cheap construction sites, which values increased by a thousand times in the last 15 years. If you get the chance to talk to our friend Buchmann, before his flight departs, presumably Saturday or Sunday, please give him a few lines which could be behavior code/rules for me.
Best wishes to you and your loved ones, always yours…

The audio tape will be made this week and will instantly be dropped off at the post office. I still wish your opinion/statement regarding the vinyls. I suggested to record one side in German and the other side in English to also design them current for America.