I find it unbelievable that there has been a “war” on poverty for the last 50 years and the cycle has still not been broken. As children we are told that the only way to succeed and live the American Dream that so many long for is to finish High School and Continue on to College. However, there are those less fortunate that cannot afford Higher Education. Finding the money to fund ones education is not as easy as others make it seem. As a child I had big dreams of going to college and doing great things with my life. You see, I came from a small town where most people were poor, especially my mother and me. My mom adopted me when I was one day old. She raised me to believe that education was the most important thing that I could ever get. My adopted mom died when I was thirteen years old.

No one in the department of child services ever had any knowledge of my circumstances so I was passed around from person to person. Eventually, I got tired of living in abuse, alcoholism, homelessness, and drug riddened environments and I decided to start my own life. I knew if I stayed I would become a product of my environment, I refuse to be “just another statistic”. The day I turned seventeen I walked out of the house I was currently residing with a book bag, a few outfits, and my mom’s bible to set out on a journey that has forever changed my life.

I met Melissa and Will Hinson of Cassatt, SC through a friend and came to stay with them. Mr. Hinson offered me the opportunity to stay there and continue my education. I got a job and later got my GED. Eventually I started Central Carolina Technical College with a major in human services. Since being at Central Carolina Technical College I have been closely working with the YWCA Of the Upper Lowlands, INC. While interning there I have done a variety of things to include: group therapy sessions with men who abuse women, to women who have been abused by men, as well as assisting in grant writing and I have also worked closely with the homeless population by providing them food and talking with them. This semester I received the Intern of the Year Award. I have a 3.2 GPA and have made the dean’s list 4 times. I graduated Central Carolina Technical College this May with my Associates Degree in Human Services and have been accepted into Winthrop University’s School of Social Work. It is my plan to graduate with my Bachelors and go on to further my education to obtain a Masters in Social Work.

My ultimate goal is to open a community outreach program to help homeless and underprivileged youth, as I once was, to get back on track and provide support to further their
education and become productive members of society. It is my belief that education is a powerful tool and is the best tool to succeed in life.

We are told as youth that the only way to do something with our lives is to go to college. Well, what about the poor, the ones who barely make the light bill, or even the homeless. Being accepted into Winthrop is a great opportunity but I do not know how I am going to pay for it. I have a Pell grant that sums up to be about 4,000 dollars, subsidized and unsubsidized loans that sum up to roughly 10,000. Recently, I came up with an extra $3,500. However, there is still 3,000 more left to pay. Without the last $3,000 a year for the next four years I cannot attend Winthrop and accomplish my dream. I’ve applied for scholarships and have yet to hear anything back. It hurts to know that I may not be able to attend school because I cannot afford it.

National Problem
– The National Runaway Switchboard estimates that on any given night there are approximately 1.3 million homeless youth living unsupervised on the streets, in abandoned buildings, and with friends or with strangers
– In 2011 the federal poverty level was $22,360 for a family of four. Adolescents who live in families below this income level are considered poor.
– The average college tuition, including room and board, per year amounts to be roughly $23,500. That’s $1140 dollars more than the federal poverty level that these individuals struggle to live on.
– Children living in poverty have an increased risk of living in poverty as an adult.
– According to the National Center for Children Living in Poverty, 66% of South Carolinian children whose parents do not have a high school degree live in poor families, 37% have a high school degree, but no college education, while only 15% of children whose parents have some college or more live in poor families.
-A College education is an essential tool to break the cycle of poverty!

I would like nothing more than to be able to fulfill my dream of working with the community and with these at risk youth who desperately need advocacy. In order to do this I need funding for college. I’ve prayed about the situation countless times. I believe that God has a plan for everyone that is created. Each of us has a choice on our journey to either accept the things that God has laid before us, and to use these experiences to change the lives of others, or to deny ourselves of his plan. I’m not sure how to fund college but I believe in the power and influence that a community can have when we come together to work on issues. 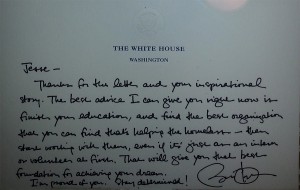