French Army Officer Whose Trial for Treason Began a Twelve-Year Controversy that Deeply Marked the Political and Social History of the Third French Republic (February 14, 1895)

Written by Dreyfus to the minister of Colonies at the very moment of his deportation to Devil’s Island … Pleading for Help.

“I have been condemned for the most infamous crime which a soldier could commit and I am innocent!” 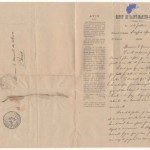